The Importance of Being an Interpreter (aka: life is tough)

Sometimes life is tough. We all know it so I won’t spend a long time talking about the twists and turns that sometimes really take the toll on us. What I want to say is, that life is tough and sometimes there’s nothing we can do about it. Recently, I had an enquiry for an interpreting assignment in support of an Italian citizen. Straightforward request: a solicitors’ meeting and an Italian speaker who needed assistance to make sure the message was transferred. The client in question had had an accident two years before, in the workplace and badly injured his hip and leg. After all that time, he still was in pain, therefore, they needed me to explain him the legal procedures of his case (he was going to file a claim and also ask for a compensation for the loss of profit he had suffered while he was at home in sickness leave). I had a lot to read about him: age, general info, family status, list of aches and pains, circumstances of the accident, medical treatments… to cut the story short: this man was in acute pain and the company owing him a compensation wouldn’t believe him. As I said, life can be very tough. But moreover my client was also angry. Angry at the system, angry at his wife for leaving him, angry for not being listened to and also so angry that he fell into depression. On top of this, as an Italian in the UK for over 35 years, his language was an amorphous mix of extremely broken, learnt-by-listening English and poor, grammar-less Itanglish, in a way so far from comprehensible that I’d never come across before. It took me at least half an hour to fine-tune to his speech style and made sure he replied to me (or to the solicitors, directly) in Italian and NOT in English, so that I could ensure some degree of civilised communication. Plus, not only was he very much in pain, but also tended to lose his temper extremely easily: all we witnessed – in my total dismay – was a man shouting in a very typically Italian or in any case Latin way, with lots of hands waving, high-pitched voice outbursts and mild swearing, alternated to sudden cries for pity. The solicitors, the man and I met in several occasions, as a second medical report was requested. Most of the work was done to really try and calm down the client, explaining that if the second report would also turn out irrelevant, he may not get the compensation he was hoping for.

Thankfully, sometimes all goes for the better. In the very last meeting with specialist in hips and accidents, the doctor managed to understand that the real problem underlying the whole issue may have been a different one compared to what had been previously diagnosed.

Several months passed and one day the postman brought me this: 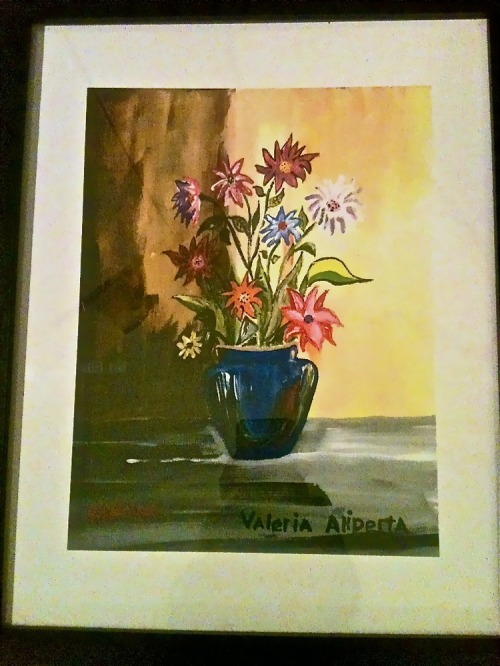 I have told you this more serious and real-life story today because I would like to stress the way-too-often underestimated importance of being an interpreter, especially in the medical area. Patients are stressed, sometimes lonely and angry, and above all, very much in pain. The interpreter is the voice, the key to express this pain and their will to be helped. The interpreter can really make the difference and of course has to be highly qualified and very patient, too. Most times I found myself trying to calm down the patient of this anecdote, but looking back I will definitely say it was worth it. He regained his cool, managed to focus and together we succeeded in conveying the right message to a knowledgeable doctor. Maybe it’s not my style, but I have to say that I like this picture very much after alland even though it looks like it has my own signature rather than a dedication to me

I’ll keep it as a reminder of a job proudly done ended with the best of outcomes.

Long live the interpreters! (and may they never be ill, either!)

London-based Rainy London Translations is offering a full range of top quality interpreting, localisation, translation, consultancy and voice-overservices for both businesses and individuals. Need something else? Just ask! It may sound like a cliché, but just get in touch: what you need can be done, at a reasonable price. Valeria is also offering a 'branding' clinic service, to help freelancers find their perfect business name or polish the existing identity by finding a logo, a tagline with sound creative consultancy. Based in the City of Westminster area, the heart of London, UK, since August 2011.
View all posts by Val →

One response to “The Importance of Being an Interpreter (aka: life is tough)”

What words I loved so far

Diary of a Mad Patent Translator

A Popular Source of Inspiration for Leaders all over the World

...for more appreciation of professional translators' and interpreters' work.

Translate in the Catskills
latitudescoach.wordpress.com/

"Providing the training, tools and expertise to help you grow your language business!"